Prominent calls for, and to investigate a public bank option

Prominent calls for, and to investigate a public bank option

The policy of establishing a post office “people’s bank”, which was the centrepiece of the Citizens Party’s 2022 federal election campaign, is now a familiar idea to many Australians. The proposal did not originate with the Citizens Party, however, but is an idea that has grown in support over more than a decade. Here are some of those:

On 26 April, one month out from the 2022 Federal Election, the Licensed Post Office Group (LPOG), which represents the interests of Australia’s almost 3,000 small business post office licensees, issued a statement titled Protecting the future of community post offices, which details the actions and commitments the LPOG is seeking from the federal government and Australia Post Board. The final point of those actions is the call to “Establish a Postal Bank to service SMEs and help sustain the network and fund infrastructure.”

Given the narrow focus of existing commercial banks, and their recent behaviour as exemplified by the findings from the Royal Commission … opportunity exists to develop a strategy by which Australia Post becomes a new force in financial services, via its existing LPO network. Not only would this generate additional income streams to fund the community operations, but it would bring real competition to the banking sector. 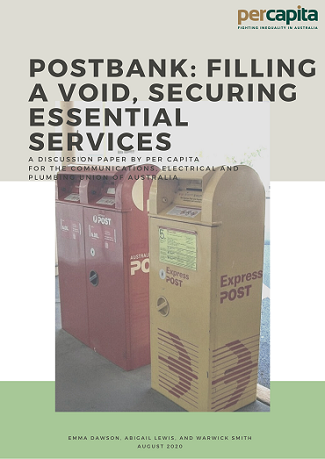 On 31 July, the Labor Party-affiliated think tank Per Capita published an excellent report on a postal bank, commissioned by the CEPU. Entitled PostBank: Filling a Void, Securing Essential Services, the Executive Summary stated:

“This discussion paper makes the case for the creation of a public bank in Australia by providing Australia Post with an Authorised Deposit-taking Institution (ADI) licence, and moving in time to establishing PostBank as a full national savings and loan bank.”

“A government-owned bank offers many benefits to Australians, including improving services for currently ‘underbanked’ customers, especially in rural and regional areas; improving standards across the financial services industry; and providing stability to Australia’s economy in times of volatility in international financial markets.”

In November 2020, the Citizens Party put forward its proposal for a Commonwealth Postal Savings Bank, accompanied by draft legislation and explanatory memorandum. Since then, the Citizens Party has received direct feedback from senior politicians in the Labor Party, Liberal Party, National Party, the Greens, Katter’s Australian Party, and One Nation, that they support a postal bank.

Paul Kofman and Carsten Murawski from the Department of Finance at the University of Melbourne proposed a public bank in response to the 2014 Financial System Inquiry chaired by former Commonwealth Bank CEO David Murray.

In an article in The Australian Economic Review, published by the Melbourne Institute of Applied Economic and Social Research, entitled, “Does Australia Need a New Banking Model?”, they wrote:

“We suggest a third solution: the establishment of a public-sector institution that provides core financial services, such as payment services, savings accounts, mortgages and other basic forms of credit, to retail customers and small- and medium-sized enterprises. We think of it as a utility that ensures cost-effective provision of basic banking services to all Australians.

“The institution would be independent but backed by the Commonwealth Government and funded by (government) equity, deposits and public debt. It would be governed by an independent board, be transparent and accountable to the public.”

The Communications Workers Union (CWU), a division of the Communications Electrical and Plumbing Union (CEPU) which represents Australia Post workers, made a submission to the Commission of Audit, established by the Tony Abbott government to identify services and assets of the Commonwealth government that could be cut from the budget or privatised. Its targets included Australia Post.

“Australia Post’s retail network should be given more freedom to leverage off of the trusted icon status, especially in rural and regional areas and move into new services such as banking and financial services, insurance services and communication services.

“This would enable ‘one stop shopping’ for communities and help fill the vacuums that have been created by the banks and other service withdrawals from regional and rural Australia. Additionally, both individuals and businesses in metropolitan areas would benefit from an added competitor to the big four banks and the obvious reduced cost of banking that would ensue.” (Emphasis added.)

Among their recommendations for what a Financial System Inquiry should consider, these six economists posed the following question:

“Should citizens who feel unsure and unqualified to shop wisely in our financial markets be able to access basic savings, payments, and wealth management products that have been vouchsafed by governments as being safe and professionally managed (e.g., why can’t Australians invest with the Future Fund)? In this regard, is there a role for a publicly-owned entity, akin to KiwiBank in New Zealand, to offer essential services in Australia’s finance sector that leverage off unique government infrastructure (e.g., Australia Post, the tax system, and the government bond market)?” (Emphasis added.)