History of the Citizens Party's fight against ‘Bail-in’

How the CEC disrupted the global bail-in regime

In 2014 the Citizens Party (then Citizens Electoral Council) prevented the G20 nations from adopting the “bail-in” model for resolution of troubled banks. The previous year, 2013, had seen a rapid drive to induce nations to legislate changes to banking law to allow this to happen, following the implementation of a bail-in test case in Cyprus.

At that time Eurogroup chief Jeroen Dijsselbloem declared Cyprus the template for the whole of Europe. Well in advance of the crisis, the European Commission (EC) had put together the Cyprus plan with banking and legal experts, foremost among them the London-based International Swaps and Derivatives Association (ISDA), whose board is made up of representatives of the TBTF banks. The ISDA had already provided the EC with an assessment of its bail-in proposal in 2011, which argued that derivatives be excluded from any bail-in, as indeed has been done in several cases. That EC proposal ultimately resulted in the Europe-wide Bank Recovery and Resolution Directive (BRRD) which became active in January 2016.

The November 2011 G20 Summit in Cannes, France, had garnered agreement to the Financial Stability Board’s (FSB) “Key Attributes of Effective Resolution Regimes for Financial Institutions”, which committed all jurisdictions to establishing a framework for “new international standards for resolution regimes”, with bail-in laws as the centrepiece. This included Australia.

In October 2013 Mark Carney, the former Bank of Canada head who by then was in charge of the Bank of England as well as the FSB, and had been an early proponent of bail-in, declared that a global bail-in regime must be finalised by the November 2014 G20 Leaders’ Summit in Brisbane. “The Bank of England is now working intensively with other authorities and the financial industry”, Carney said. “Our aim is to complete the job by the next G20 Summit in Brisbane.” In April 2014 Carney followed this up with a report on the urgency of empowering national authorities with laws to make bail-in “effective in a cross-border context”, i.e., globally. Thus the 2014 G20 became the battleground for bail-in legislation for all G20 jurisdictions.

But on 10 November 2014, just four days before the Brisbane G20 summit, Carney announced: “Instead of having the public, governments, [and] the taxpayer rescue banks when things go wrong; the creditors of banks, the big institutions that hold the banks’ debt—not the depositors—will become the new shareholders of banks if banks make mistakes.” The announcement was a tactical retreat, forced by the campaign the Citizens Party (then CEC) had run across Australia, and into the UK, to expose the intention to confiscate deposits. The ostensibly watered-down bail-in would focus on special bonds designed to convert into bank capital in a crisis—so-called hybrid securities or bail-in bonds. The FSB demanded that TBTF banks hold 16-20 per cent of the value of their assets in these bail-in-able bonds; nonetheless the Citizens Party (then CEC) and its allies had forced Carney et al. to repackage their scheme.

Even the watered-down bail-in language still failed to win the necessary support at the 2014 summit, however, due to opposition from among emerging nations centred in the BRICS bloc (Brazil, Russia, India, China and South Africa), and also, in part, because host country Australia had failed to adopt a bail-in law beforehand, as had been expected. Instead, the summit’s final communique stated that requirements for what banks must be prepared to do when in trouble would be subject to public consultation and a rigorous impact assessment before any final measure were agreed. One year later, with revised targets for emerging markets, the language was agreed to at the Antalya, Turkey G20 summit in November 2015, ahead of which Carney had forewarned that all member nations were expected to comply by legislating new rules.

The Citizens Party ran an intensive campaign against bail-in laws throughout 2013. We informed Australians about the Cyprus bail-in beginning with a 26 March media release titled “The Cyprus option, or Glass-Steagall?”, and in April warned it was coming to Australia. On 15 April 2013 the FSB reported to the G20 Finance Ministers and Central Bank Governors that legislation for bail-in was “in train” in Australia. 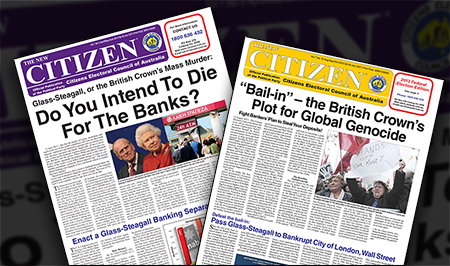 In early June 2013 the Australian Financial Review finally reported on the drive for bail-in. Citizens Party had issued hundreds of thousands of copies of the April/May/June 2013 New Citizen, “Do You Intend To Die For The Banks?”, followed by the Aug/Sep/Oct New Citizen “‘Bail-in’—the British Crown’s Plot for Global Genocide”. In December 2013 the Citizens Party (then CEC) ran a full-page ad in The Australian, including signatures of support from 450 elected officials, community and trade union leaders, calling to stop bail-in and pass Glass-Steagall bank separation instead.

On 13 December 2013 Reserve Bank of Australia head Glenn Stevens told the AFR that in order to prevent the public purse having to recapitalise banks in a crisis, “The international push is also going towards so-called ‘bailing-in’”, which he expected to be considered by the upcoming Financial System Inquiry (FSI). At a 10 June 2014 banking symposium in San Francisco, Stevens announced that Australia was “highly supportive” of Carney’s efforts, describing bail-in as “an appealing idea”.

The Citizens Party (then CEC) turned the blowtorch of its anti-bail-in campaign on the FSI throughout 2014, generating, in two rounds of public consultation, over 700 submissions against bail-in and in favour of full, Glass-Steagall separation of the Big Four TBTF banks. This flood of submissions attracted mainstream media attention.

As intended, the FSI endorsed the Australian government’s push for bail-in. At its conclusion, the Inquiry announced that it was time for the government to revive its plans to give APRA new crisis management powers, as first raised by the Gillard Government in September 2012 then put on hold in 2013 to await the result of the FSI.

Another proof of the success of the Citizens Party’s intervention in Australia is that most other G20 jurisdictions passed bail-in laws far earlier. The U.S. powers were introduced as part of the Dodd-Frank Wall Street Reform and Consumer Protection Act in July 2010.

New Zealand’s Open Bank Resolution policy was proposed in March 2011 and finalised in June 2013. It allows “a distressed bank to be kept open for business, while placing the cost of a bank failure primarily on the bank’s shareholders and creditors”, according to the Reserve Bank of New Zealand, which is explicit that creditors include depositors.

France passed bail-in laws in July 2013, and the aforementioned BRRD took effect across the EU on 1 January 2016. The UK put the powers into effect from 1 January 2015.

This story demonstrates that the fight against APRA’s bail-in powers has implications well beyond Australia, because the law is part of a larger push for a new form of global financial order that must be uniform across the world, to ensure that no one nation’s actions can threaten the $1.2 quadrillion global derivatives bubble. Rolling back the APRA bill in Australia—whose financial system as a whole is officially defined as “systemically important”—can derail that agenda, and even in countries where bail-in is firmly in place, or has already been used, it can still be reversed.

Bail-in
Banking / Finance
[ Back to top ]