The situation in much of rural and regional Australia was starkly portrayed by Ernie Bridge, upon his quitting the ALP in 1996. Bridge was a former Western Australian MP and Minister for Resources Development, and was the chairman of the Watering Australia Foundation.

“Governments nowadays are simply mauling inland Australia. The practice of so-called microeconomic reform or economic rationalism, call it what you like, has brought about the most destructive dismantling of basic infrastructure in this nation’s history and it is apparent the major parties are not prepared to recognise this and alter their economic policies… When one sees population reductions of over 50% in some areas of our nation, it emerges as a frightening situation. I cannot stand back and see good battling Aussies simply handing over the keys to banks at such regular intervals as is happening. when you talk and look into the eyes of many people of the outback, you see signs of fatigue and a loss of hope.”

By contrast, the great water projects depicted on the maps, and described in more detail below, are exemplary of the scale upon which Australians must think, if we are to conquer our dry, largely empty continent, as well as the deepening depression. The precise details of each project (some bits and pieces of which have been completed), are much less important, than the general approach, which is to think big, i.e. to think of the continent as a whole, and to think long-term, of what will be required over the next 25-50 years, at minimum, with much higher rates of growth than the negative real growth rates of the post-industrial (and, increasingly, “post-agricultural”) nonsense of the past three decades. As the 1996 Australian Encyclopedia was forced to acknowledge, in describing such projects as the Clarence, Bradfield and Reid Schemes, in particular, “Modern investigation methods have ensured that most of the proposals are feasible in technical and engineering terms,” though it protests that “the same can not be said for their economic feasibility.”

However, such well-chosen, well-engineered projects, provided that they are integrated with other vital aspects of infrastructure, such as a high-speed rail system to get products to market, are always cost-effective, because they unleash far more revenue-generating economic activity than they cost, provided one calculates on a real, physical basis, and not on the lunatic “user-pays”, “full cost recovery” method of economic rationalism, which is expressly designed to ensure that little or nothing will ever be built. For a refreshing example of something in the direction of such real, physical accounting versus the bean-counting “it costs too much” nonsense, see the Queensland Government’s Office of Northern Development figures on the economic activity to be unleashed by the revised Bradfield Scheme, versus the cost of that scheme, which proves, hands-down, that the scheme will more than pay for itself—in fact, it almost pays for itself in a single year! (available from the office of MP Bob Katter, who has spearheaded the effort to finally build the Bradfield Scheme, or from the Citizens Party). 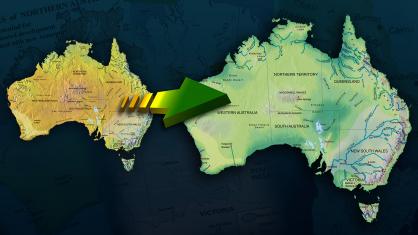 And remember, by the standards prevailing in 1939, we “couldn’t afford” to fight World War II. Yet, as Ben Chifley used to emphasise, we spent 350 million pounds per year during the war vs. 60 million per year pre-war, and, notwithstanding the great losses of men and materiel (and the fact that war production itself, as opposed to its technological spin-offs, is usually a dead loss) we came out a far richer nation than we went in. The present depression must be tackled with similar methods, and similar determination.

Australia’s growing water shortages (see Map 1 “Australia’s Water Problems”), will only be overcome through the kind of bold projects outlined on Map 2, “New Great Water Projects”. The projects provide the vision around which we must mobilise our nation.

More details on these will be published soon, but for now the list of key project proposals the Citizens Party has identified are:

Call for submissions to the Senate’s Project Iron Boomerang inquiry

29 Sep 2022
The Citizens Party explained the project in this four-minute YouTube video produced in November 2020: BUILD THE IRON BOOMERANG! Australia must return to nation building, a NATIONAL BANK can fund it
Read more
[ Back to top ]