Xinjiang: China’s western frontier in the heart of Eurasia (Part 3)

By Melissa Harrison and Rachel Douglas

Parts 1 and 2 of this series, in the AAS of 18 November and 2 December, summarised the history of central Eurasia during the “Great Game” of the British Empire against the Russian Empire in the 19th century, and the rebranding of that policy as an “Arc of Crisis” in the 1970s, when geopolitical schemers such as the British-born orientologist Bernard Lewis and Polish immigrant Zbigniew Brzezinski held sway over American foreign policy. The area in question includes Afghanistan, where the US Central Agency and its British counterpart, MI6, backed the mujaheddin insurgents during the Soviet Union’s intervention in that country (1979-88). These increasingly radical Islamist guerrillas were to form the core of the terrorist groups al-Qaeda and the Islamic State (ISIS).

When Bernard Lewis, Zbigniew Brzezinski and their co-thinkers crafted the Arc of Crisis doctrine in the late 1970s, China was not its primary target. The presumed adversary of the United States and NATO was the Soviet Union.

China at that time was barely climbing out from the brutal Great Proletarian Cultural Revolution (1966-76), which had ended with the death of Communist Party of China Chairman Mao Zedong in 1976 and the downfall of the group, led by Mao’s wife, known as the Gang of Four. Relations between the People’s Republic of China (PRC) and the Soviet Union were still stalled by the “Sino-Soviet split”, a rupture that arose in 1956 from disputes between their respective ruling parties (not without outside influences), peaked in military clashes on the Ussuri River in 1969, and began to be mended only in the late 1980s, in the final years of the USSR.

When Henry Kissinger, as national security adviser to President Richard Nixon, secretly visited Beijing in 1971 to prepare a presidential visit and open USA-PRC relations, the exploitation of China as a potential geopolitical and balance-of-power counterweight to the Soviet Union was a major goal.1

After the 1991 dissolution of the Soviet Union, Anglo-American geopolitical aims shifted somewhat, but the engagement of western intelligence agencies in central Eurasia continued. In line with the so-called Wolfowitz Doctrine of the Bernard Lewis-inspired “neocon” faction in the USA, which held that no country must ever attain as much power as the Soviet Union had possessed, covert operations went forward, aimed at weakening Russia (even while trying to take it over, with raft-loads of City of London and Wall Street economists descending on Moscow to dictate economic policy).

Various factions of the Afghan mujaheddin formed the Islamic State of Afghanistan in 1992, which promptly became involved in fighting on what had been Soviet territory in Central Asia: a bloody civil war in Tajikistan, in which Russia defended that newly independent state against an Islamist insurgency.

New economic motives for western involvement appeared, too, as the big multinational oil and gas companies charted plans to lay hands on resources that had been under Soviet control. Another major shift took shape during an interval of instability after Soviet withdrawal from Afghanistan (1988), when warlords there stepped up their production and sale of opium. In little more than a decade, Afghanistan by 2001 became the world’s leading producer of opium poppy; this marked a transformation of international narcotics and criminal money flows, with shipment routes crossing most of the countries in the region.

Equally important on a global scale, the American- and British-backed mujaheddin began to fan out. As many as 35,000 fighters, according to various estimates, went through mujaheddin training camps in Afghanistan and the mountains of neighbouring Pakistan, starting at the time of the CIA’s Operation Cyclone in 1979 (see Part 2). These battle-hardened guerrillas soon began to turn up in coups, massacres of civilians, and other terrorist operations across Eurasia.

In Europe, the break-up of socialist Yugoslavia (which had been non-aligned since splitting with Moscow in 1948) set the stage for ethnic and religious strife to break out in the Balkan Peninsula, the same area where such conflicts had been manipulated by British intelligence and others to touch off World War I. The armed forces of Bosnia-Hercegovina, a historically Muslim area as a part of the Ottoman Empire until 1922, fought against Serbs from Serbia and from within Bosnia-Hercegovina itself. They were augmented by several thousand “foreign fighters”, many of them Islamist guerrillas who arrived from Afghanistan in 1992 to help their “co-religionists”. With NATO forces also deployed on Bosnia’s side, the mujaheddin and NATO were effectively brothers-in-arms.

In 1994 another major engagement of fighters trained in and around Afghanistan began, in the Russian North Caucasus. This region between the Black Sea and Caspian Sea, north of Armenia, Azerbaijan and Georgia, is home to several small, ethnically defined entities, which were “autonomous republics” in the Soviet Union and are now units within Russia.

For years, British intelligence and allied analysts and profilers had predicted that a revolt in the Caucasus, where there had been countless uprisings against the Russian Empire in the 19th century, would destroy the Soviet Union. A chief propagandist for this scheme was Prof. Alexandre Bennigsen of the Paris Sorbonne, one of Zbigniew Brzezinski’s mentors.

When, in 1991 amid the turmoil of Soviet disintegration, a group in the Chechen-Ingush Autonomous Republic proclaimed independence, the UN-approved Unrepresented People’s Organisation sent a team to monitor elections. Its report appeared in full in the British Central Asian Survey, edited by Bennigsen’s daughter Marie Broxup. The Chechen separatists also received encouragement and patronage from former British Prime Minister Margaret Thatcher, her ally Lord McAlpine, who conceived a project for a Caucasus Common Market, and the Minority Rights Group of Britain, chaired by Sir John Thomson, former British ambassador to India and to the United Nations. In late 1994, Moscow moved to put down the separatist insurgency by force in the First Chechen War (1994-96).

The Chechen separatists had an extreme militant wing, among whose leaders was a foreign fighter from Saudi Arabia by the name of Khattab, who had fought against the Soviets in Afghanistan with the mujaheddin. Another leader, Shamil Basayev, boasted of having trained in Afghan camps. Basayev said in July 1995: “I was preparing for war with Russia a long time…. Together with fighters from my Abkhazian [separatists within Georgia] battalion, I paid three visits to Afghan mujaheddin camps, where I learned the tactics of guerrilla warfare.”2

Basayev and Khattab orchestrated mass kidnappings and bombings in Russia, and in 1999 launched the Second Chechen War with an invasion of the Republic of Dage-stan (Russian North Caucasus) from Chechnya. They were killed in 2006 and 2002, respectively, in Russian counterinsurgency operations.

By the mid-1990s, there was reason from the standpoint of the “one superpower” Wolfowitz Doctrine, to aim the Arc of Crisis at China. In 1994-96 Beijing had begun publicity and on-the-ground work for building the New Euro-Asia Continental Bridge. China hosted its historic Land-Bridge conference in May 1996 (see Part 1). The same month, a rail link was opened between Mashhad, Iran and Tejen, Turkmenistan (formerly in Soviet Central Asia), providing an important transcontinental route from the Persian Gulf eastward into China, or from China back westward through Turkey to the Mediterranean Sea and Europe.

What did this mean to the instigators of the Arc of Crisis? Their Afghanistan covert operations were already generating a worldwide expansion of terrorism, but they considered them a success. In 1999 a former CIA analyst declared: “The policy of guiding the evolution of Islam and of helping them against our adversaries worked marvellously well in Afghanistan against the Russians. The same doctrines can still be used to destabilise what remains of Russian power, and especially to counter the Chinese influence in Central Asia.”3 (Emphasis added.)

Arguing along similar lines was Graham Fuller, a twenty-year career CIA officer, who had been its Kabul (Afghanistan) station chief from 1975 until 1978, the eve of Operation Cyclone. Appointed the Agency’s National Intelligence Officer for Near East and South Asia in 1982, Fuller was promoted in 1986 to vice-chairman of the National Intelligence Council, the mid- and long-term strategic thinking body for the United States Intelligence Community.

Declassified CIA memos authored by Fuller reveal that his “suggestions” were to prove highly influential, foreshadowing US military aggression against Syria4 and the illegal arms deals of the 1980s Iran-Contra affair—the scandalous arrangement for the USA to sell arms to the Islamic Republic of Iran and fund anti-communist guerrillas in Central America with the proceeds.5 After Iran-Contra was exposed, Fuller left the CIA in 1988 to work at the American “party of war’s” premiere thinktank of the post-World War II era, the RAND Corporation,6 for twelve years as Middle East specialist. He then moved on to teach history at Simon Fraser University in Vancouver, British Columbia. 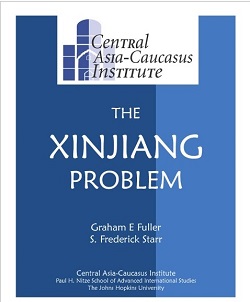 Starting in 1998, Fuller led a study titled “The Xinjiang Project”, which appeared in 2003 as a pamphlet, The Xinjiang Problem. Here he assessed the potential of Uyghur ethnic separatist movements, concluding: “It would be unrealistic to rule out categorically American willingness to play the ‘Uyghur card’ as a means of exerting pressure on China in the event of some future crisis or confrontation.… [M]any of China’s rivals have in the past pursued active policies in Xinjiang and exploited the Uyghur issue for their benefit.”7

Fuller noted that Beijing officials believed foreign Pan-Turkist and Islamist groups were agitating separatist Uyghur factions in Xinjiang already at that time, with wealthy Saudi benefactors funding the dissemination of Wahhabite (Islamic fundamentalist, from the dominant tendency in Saudi Arabia) literature in Xinjiang and possibly arms-smuggling as well.

The CIA veteran of Afghanistan admitted then, in 2003: “The reality is that Uyghurs are indeed in touch with Muslim groups outside Xinjiang, some of them have been radicalised into broader jihadist politics in the process, a handful were earlier involved in guerrilla or terrorist training in Afghanistan, and some are in touch with international Muslim mujahideen struggling for Muslim causes of independence worldwide.”

Up next, Part 4: Pan-Turkism

Footnotes: (Click on footnote number to return to text)

1.  Ray McGovern, “Presumptuous Pompeo pushes preposterous policy on ‘Peking’”, Australian Almanac, AAS, 9 Sept. 2020. As a CIA Soviet affairs analyst in the 1960s-70s, the author watched “the constant build-up of hostility between Russia and China, and how, eventually, Nixon and Henry Kissinger saw it clearly and were able to exploit it to Washington’s advantage”.