This article was first published in the The New Citizen November/December 2014, Vol.8 No.1

There have been over 15,000 cumulative reactor-years of commercial nuclear power operation in 33 countries, since the first nuclear fission power plants opened in the 1950s.

While Anglo-American-owned media outlets have promoted mass hysteria over the prospect of “nuclear meltdowns”, consider both what has actually happened, and the science behind the latest generation of fission reactors, which renders “nuclear meltdowns” impossible.

There have been three notable major nuclear accidents: Three Mile Island (USA, 1979), Chernobyl (USSR, 1986), and Fukushima (Japan, 2011). There were no injuries or adverse health effects from the Three Mile Island accident, even though 62 tonnes of the reactor core melted after a cooling malfunction, because the containment building worked as designed.1

The Chernobyl accident resulted from a flawed reactor design, while the reactor itself was poorly operated by inadequately trained personnel, resulting in a steam explosion and the release of radiation into the atmosphere. Two workers died from non-radiological causes within hours of the explosion. Acute radiation sickness killed 28 workers and first responders within four months of the event. The death toll has since increased to about 56. The United Nations Scientific Committee on the Effects of Atomic Radiation (UNSCEAR) has determined that, apart from increased thyroid cancers, “there is no evidence of a major public health impact attributable to radiation exposure, 20 years after the accident.” More than 99 per cent of the children suffering thyroid cancer were treated successfully. Modern reactors have numerous safety features to make a Chernobyl-style accident impossible in the future (World Nuclear Association, “Chernobyl Accident 1986”).

The Fukushima nuclear accident was touched off by an earthquake and resulting tsunami, which killed 15,889 people, injured 6,152, and left 2,601 missing, yet not one person has died or suffered from radiation sickness due to the damage to the reactors. In May 2012, UNSCEAR reported that, despite skin contamination of several workers, no clinically observable adverse effects have been reported and there is no evidence of acute radiation injury to any of the 20,115 people who participated in accident mitigation at Fukushima. In May 2013, based on research by 80 international experts, UNSCEAR concluded: “Radiation exposure following the nuclear accident at Fukushima Daiichi did not cause any immediate health effects. It is unlikely to be able to attribute any health effects in the future among the general public and the vast majority of workers.”

The latest, fourth-generation reactors have built-in safety features, superior to those of the Fukushima reactors, built in the 1970s. These new reactor designs for higher-temperature operation, scheduled for deployment between 2020 and 2030, will ensure that a Fukushima-type accident cannot occur, even in the event of an earthquake or tsunami (World Nuclear Association, “Generation IV Nuclear Reactors”).

Now consider energy production by other means, notably coal, which accounts for 30.1 per cent of world energy production and over 40 per cent of the world’s electricity. Thousands of workers worldwide are killed each year in coal mines, not to mention the adverse health effects (as in China) of burning more than three billion tonnes of coal each year. Moreover, given that power stations require huge tonnages of coal, the mining, shipping and other handling of so much coal (or of any material on that scale) involves hazards, so death rates and injury follow accordingly.

In the United States alone, more than 100,000 coal miners died in accidents in the 20th century. Safety has improved over the decades, yet in 1994-2013, 652 U.S. coal miners were killed in accidents. In the case of uranium, of which a far smaller volume needs to be mined, accidents in the process of mining uranium ore, fabricating uranium dioxide fuel, and handling these materials are negligible by comparison.

Hydropower is generally safe, but there have been some major dam collapses. The Chinese Banqiao Dam collapse in 1975 killed approximately 26,000 people in the initial flood, and another 145,000 died in ensuing epidemics and famine. The 1979 Machhu dam failure in India killed between 5,000 and 10,000 people. A turbine explosion at Russia’s Sayano-Shushenskaya Hydroelectric Power Station in 2009 killed 75. 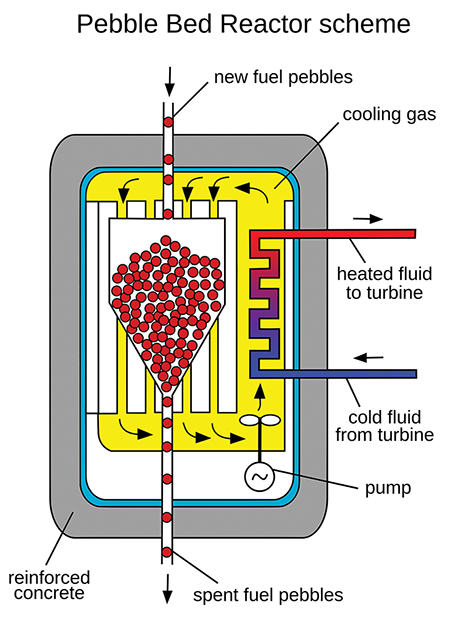 The Paul Scherrer Institute, the Swiss-based research centre for natural and engineering sciences, reported from a study of severe accidents (more than five fatalities) across the power industry, that no severe accidents occurred in the nuclear power industry in OECD countries in 1969-2000. Worldwide accidental deaths from nuclear power production are lower, per unit of power generated, than for any other power source.

The latest fission power technologies, such as the Pebble Bed Modular Reactor (PBMR) and Molten Salt Reactor (MSR), make a meltdown impossible. The PBMR design encases the nuclear fuel in tiny ceramic spheres; in the event of a coolant failure, the reactor shuts itself down without human intervention. In the MSR design, the fuel is already molten. In the event that overheating began, the fuel would expand and become less reactive, blocking any runaway process. If overheating nonetheless continued, a drain plug would melt, allowing the liquid fuel to flow by gravity into tanks serving as safe heat sinks.

What about nuclear waste? In modern nuclear power plants, there should be no such thing. Spent nuclear fuel can and should be reprocessed, so as to produce a hundred-fold more energy, while valuable medical and industrial isotopes may also be extracted from it. Given recent technological advances, it would be foolish to bury this valuable material. Several countries already reprocess spent fuel. Even in those that wastefully store it, there has been no health or safety disaster in the history of nuclear power generation.

In controlled thermonuclear fusion power, which will power human society for the next 10,000 years, there is no chain reaction that even theoretically could lead to a runaway process. If fusion begins to run too fast, the extra heat actually hampers the reaction. If too much fuel were to enter the containment vessel, the reaction would die immediately. Also, fusion reactors produce negligible radioactivity.

1. There is evidence that the Three Mile Island event may have been no accident. The Fusion Energy Foundation and other responsible bodies explored the possibility of deliberate sabotage (“The NRC Report on TMI: Refusal to Investigate Sabotage”, Fusion, Nov. 1979.) The incident was used to create hysteria against nuclear power. (Return to text)

The High-Temperature Reactor is Coming

Thorium: The Preferred Nuclear Fuel of the Future