Banking should not be the exclusive domain of the private sector, as discredited neoliberal ideology demands, but should be available to the government, so that the power of banking to create credit can be harnessed and directed for the long-term investment needs of the nation.

The private financial sector, even a well-functioning one, will prioritise profit in lending decisions, but the government needs to be able to invest in long-term infrastructure projects that don’t make a profit, but increase productivity from which the nation profits. Instead of making such investment out of annual revenue, a national bank enables the government to use public credit and not have to borrow from overseas.

Remember the Commonwealth Bank, before the Hawke/Keating ALP sold it? It was the “people’s bank”, which served the people, and was owned by the people. The centrepiece of the urgently-required reorganisation of the financial system will be the establishment of a new people’s bank, a Commonwealth Bank-style, government-owned national bank. 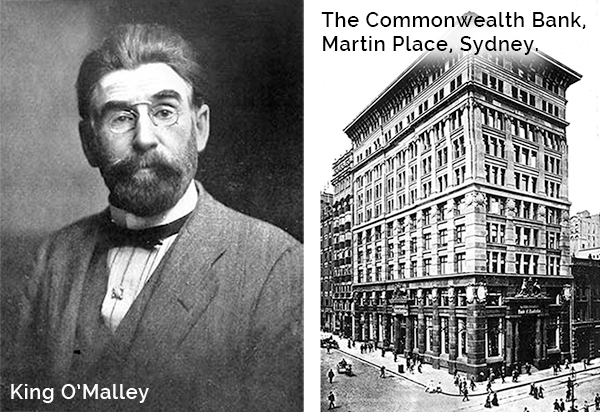 Whereas Glass-Steagall is an emergency protectionist measure, to erect a firewall between the imploding financial system and the people, so they keep their savings, the Citizens Party's Commonwealth National Credit Bank Bill will facilitate the next step, which is the reconstruction of the economy, and the creation of a new financial system, in a way that furthers the common good of the people.

The policy of banking for the common good was the vision of the “old” Labor Party of King O’Malley, Frank Anstey, Jack Lang and John Curtin, which was initially realised through the 1911 establishment of the Commonwealth Bank. In its first years of operation during WWI, under the governorship of Sir Dennison Miller, the Commonwealth Bank: forced the private banks, through competition, to lower their fees; then it “saved” those same banks by averting a “run” on the private banking system; and financed many important war-related measures.

Sadly, with the untimely death of Governor Miller in 1920, private financial interests directed Tory Prime Minister Stanley Melbourne Bruce to hand over control of the bank to private bankers, and strip it of essential powers, so that it never functioned as effectively again. Save for the brief period of WWII, when John Curtin and Ben Chifley empowered the Commonwealth Bank to regulate and direct the entire national banking system for the war effort, the function of the Commonwealth Bank was systematically eroded over the decades. It lost its reserve banking powers in 1959, which put its central banking function under private control, and was eventually reduced to a simple, government-owned savings bank, before it was privatised in three tranches from 1991 to 1996. However, even as a simple savings bank, its role was essential: it guaranteed every depositor’s savings (which guarantee was lost once it was privatised) and it kept the private banks’ fees low, by forcing them to compete. Once it was privatised in 1996, the big four banks went on a profit spree by hiking fees and slashing staff and branches, and gouging over $80 billion in profits in ten years!

It is time for a new national bank with all the powers to regulate and direct the national economy.

The Citizens Party is currently refining legislation to establish a Commonwealth National Credit Bank (CNCB), which can extend credit to the government for investment in public infrastructure projects that will reindustrialise Australia and create jobs; and for credit assistance to family farmers, manufacturing entrepreneurs and small businesses, who just need a fair go but have been starved of credit by the private banks. The CNCB will also regulate the private banks, guarantee the deposits of the commercial banks (as opposed to the speculative investment banks), conduct an in-depth, honest audit of all Australian banks—which neither APRA nor anyone else has done at present—and reorganise and save any which are not hopelessly bankrupt. It will help to save Australians’ retirement savings locked up in superannuation funds, which as things now stand will be at risk in a crash. Superannuation funds will be able to invest in debentures (special bonds) issued by the national bank for a guaranteed return, thereby investing in Australia’s economic future. 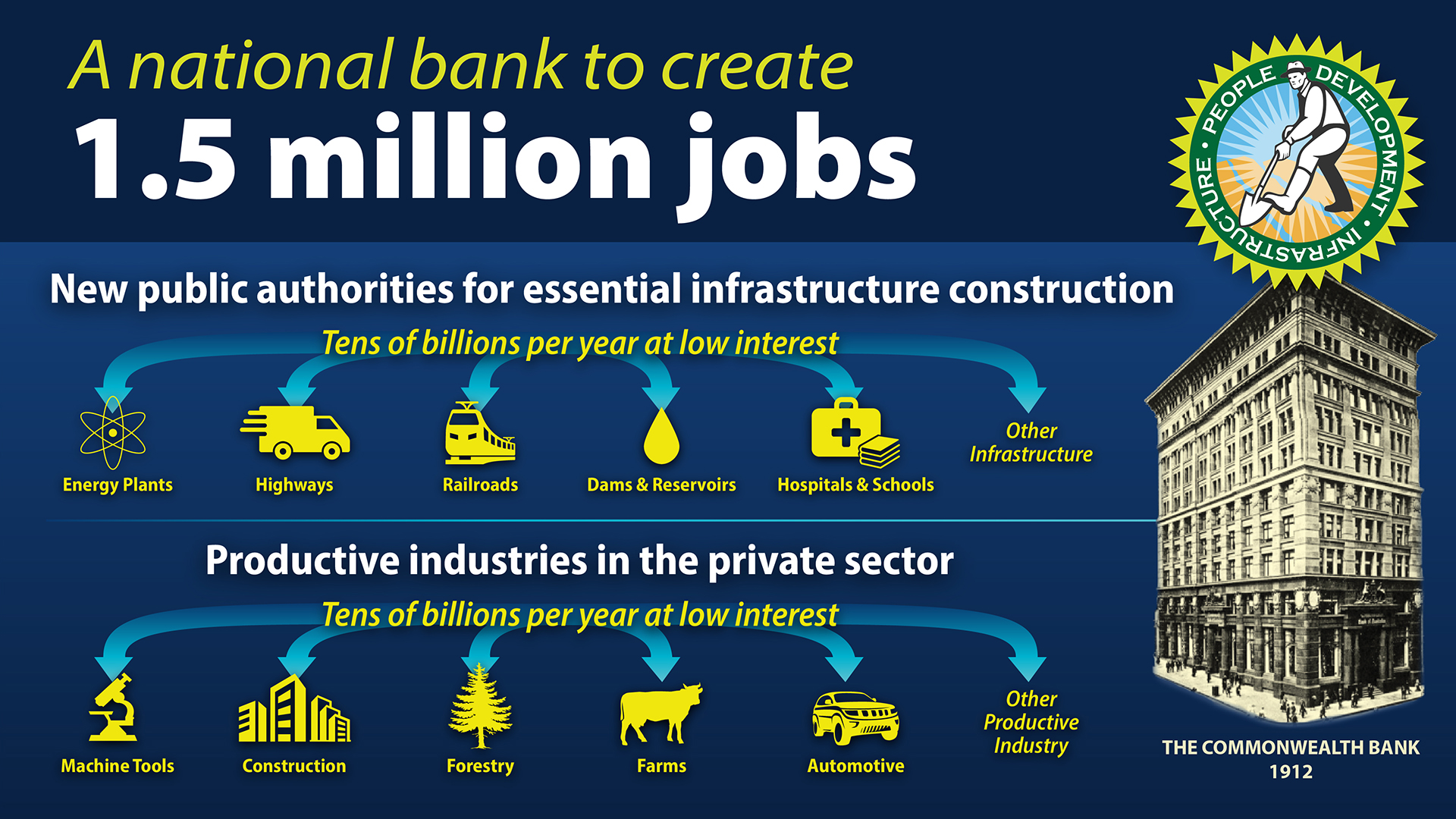 An Act to overturn the current monetarist philosophies and policies and return Australia to a public credit-based system implemented through a system of national banking, to establish a new, government-owned national bank to regulate Australia’s national credit, to thereby re-establish public confidence in the banking system, to restore to the Australian Parliament the Constitutional power to regulate Australia’s currency and credit, re-enforcing the Constitutional obligation of the Commonwealth to regulate the Australian economy which requires the Commonwealth government to ensure an orderly flow of credit and currency to public and private enterprise engaged in the production and transportation of tangible economic wealth, including manufacturing, agriculture, construction, mining, public utilities and transportation and enable the financing of nationwide infrastructure projects in water, high-speed rail, and energy among other vital aspects of the economy, to act as science-drivers and to increase Australia’s physical-economic productivity and therefore the standard of living of all Australians.

A few features of the legislation

The CNCB establishes a Bank which is responsible to Parliament, instead of to the private individuals who currently run the Reserve Bank, and mandates, by law, the Bank to function in such a manner as to cause a rise in Australia’s “potential population-density” through a “rise in the physical output of the nation” and in “the rate of introduction of new technologies into the economy.” Precise measures to calculate such rises are specified, so that the Bank has no choice, but to so function, or an investigation is mandated.

All new credit creation by the new Bank shall, by the terms of this Bill, be tied to tangible hard commodity production. The present Reserve Bank’s ability to create or extinguish credit by “open market operations”—is expressly forbidden.

The new Bank will have eight divisions, as follows:

The existing informal regulation of trading banks has been formalised, and provisions have been included to stop banks and other financial institutions from engaging in or financing speculative activities relating to currency, foreign exchange. derivatives, and the like.

All activities of the CNCB are to be open for public scrutiny and statements of account and activities are to be laid before the Parliament within 30 days of the close of each calendar month.

Call for submissions to the Senate’s Project Iron Boomerang inquiry

29 Sep 2022
The Citizens Party explained the project in this four-minute YouTube video produced in November 2020: BUILD THE IRON BOOMERANG! Australia must return to nation building, a NATIONAL BANK can fund it
Read more
[ Back to top ]